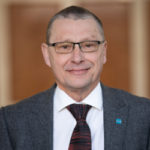 In a career spanning over 40 years, Philip has held senior credit management roles in the high-tech and communication sector and in distribution and retail, which included spells at Olivetti and Vodafone. He was appointed Director General of the ICM in 2005, and later Chief Executive. Philip was behind the Institute’s drive to become a Chartered body (becoming the CICM in 2015).

Philip is the author of the Managing Cashflow Guides for government, and the architect of the Prompt Payment Code which the CICM has administered on behalf of the Department for Business, Energy and Industrial Strategy (BEIS). He has worked closely with successive governments in championing best-practice credit management and supporting small business.

In his time leading the CICM, Philip has helped transform the Institute and elevate its profile, keeping professional credit managers in the minds of government and key influencers.

Philip was a board member of the Start-Up Loans Company (the Company has delivered more than 50,000 loans worth almost £340 million), a Red Tape Champion for Insolvency and the first ever lay Chair of the Joint Insolvency Committee.

The CICM has worked tirelessly with government agencies to support small businesses and change attitudes towards late payment. I am delighted to have been appointed the role of interim Small Business Commissioner and to be given the privilege of directly supporting government deliver its industrial strategy to help small businesses prosper and grow.

“Recognising the needs of all businesses both small and large is an essential part of resolving potential conflict and preventing issues from occurring in the first instance. Poor payment behaviour should be identified and called out and I will actively encourage small businesses to engage with the Commissioner’s office at the earliest opportunity if there is a problem. It is also important that we highlight examples of best-practice to which others should aspire.