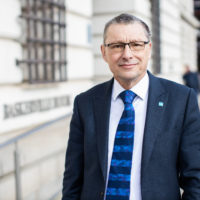 In Autumn 2008 Lord Mandelson, who was then Business Secretary at BERR (remember that?!), asked me and my organisation (the Chartered Institute of Credit Management) to create, host and administer a voluntary code to encourage businesses to pay their suppliers more quickly. I little expected to still be involved in it almost 13 years later.

As I prepare to hand over the reins of the Small Business Commissioner role to Liz Barclay, now seems a good time to look back and reflect on something that has been close to my heart throughout the intervening years.

We were in the depths of the financial crash in 2008, and government was looking at every opportunity to drive recovery and revival. An initiative that helped cash get more quickly into the accounts of businesses was seen as a way of stimulating the economy.

The Prompt Payment Code was one of the outcomes from numerous early-morning discussions and round tables in the basement of 1 Victoria Street, involving banks, business organisations, government officials and many others. The ultimate aim of the Code, which is owned and has its policy set by government, was to create a business culture where paying suppliers on time was the norm rather than the exception.

Over the years, the Code has evolved, strengthened and reformed, but the core commitments have remained unchanged: to pay suppliers on time, to give clear guidance to suppliers, and to adopt and encourage good practice. Three particular changes stand out.

First, the enhanced requirement introduced in 2015 that signatories should pay 95% of all invoices within 60 days. Second, the introduction of the Payment Practices Reporting Regulations 2017, and third, the move of the Code’s administration to the Office of the Small Business Commissioner in March 2020.

Compliance with the Code requirements is only able to be enforced because of complaints received from supplying businesses. It’s no surprise that there was a natural reluctance to ‘shop’ a key customer. For large company signatories, the introduction of payment practices reporting meant that a signatory was publicly stating if they were not paying sufficiently on time. It was no longer the word of a supplier against their customer: the signatory’s own data became the source of measurement.

As a result, throughout 2019 and early 2020, many firms were suspended from the Code. They were reinstated only when they had submitted and successfully implemented action plans that brought their payment practice into line. I found that working with businesses to transform their payment processes and systems, as well as their internal payment culture, was a joy. It was hugely encouraging to see real transformation – almost all of the firms suspended at that time have now returned to the Code.

Government had for some time expressed an intention to move administration of the Code from the CICM (a professional membership body) to the Office of the Small Business Commissioner, so that late payment measures were brought under one umbrella. That transfer took place in March 2020, six weeks after I was appointed Interim Small Business Commissioner, and was made easier because of my involvement in the Code throughout its life.

Since it was moved, I’m pleased to say that 1,015 new businesses have signed up, taking the total signatory count to 3,214. We supported a BEIS consultation leading to changes to the Code requirements announced in January 2021, and the governance process and structure has also been overhauled.

Several further changes were announced in January this year. The key one was a new requirement that, from July 2021, 95% of invoices from businesses with fewer than 50 employees must be paid within 30 days, alongside the continuing 95% of all invoices within 60 days rule.

It’s interesting and pleasing that the Office of the Small Business Commissioner has worked with many businesses since January, as they identify their smallest suppliers and ensure they are paid more quickly. And it’s encouraging that the more demanding criteria have not slowed the rate at which businesses are committing to the Code. We’ve seen an additional 442 businesses sign up since the day the reforms were announced.

Throughout its existence, the Code has had its critics. Some have contended that it has inadequate teeth and must be made compulsory if it is going to be effective. On the latter point, if it is made mandatory then it becomes legislation and not a voluntary code. On the former, the Payment Practices Reporting Regulations introduced a means by which compliance could be measured and enforcement could take place.

However, I would argue that one of the Code’s key successes has been to raise the level of debate around late payment. Over the years, when I have been questioned (and sometimes castigated) about the Code, the conversation has centred on the damage caused by late payment and the need to eradicate it. Without the Code, many of those conversations would not have taken place. There can be no doubt that the issue of late payment is considered at boardroom tables far more now than it ever was, and the culture of exploiting the supply chain is diminishing.

There have also been misunderstandings, the most prevalent of which is that the Code is only for large businesses. It is not. Any business of any size can make the required commitments and there are hundreds of small businesses that have signed up. Sadly, many small businesses treat suppliers badly as well as large ones. The responsible treatment of suppliers and the prompt payment of invoices is needed across the whole business community if culture change is going to be achieved.

So what of the Code’s future? The changed requirement to pay the smallest suppliers in 30 days is imminent, the overhauled governance process and structure is being rolled out, and other changes, such as the requirement for an annual declaration of compliance by businesses not subject to the PPR Regulations, are to be introduced.

I believe all of these will have a positive impact and I believe the Code will continue to play an important role in driving cultural change. I want to see an environment in which those businesses who behave badly and exploit their supply chain stand out, and where their behaviour is considered unacceptable. Paying on time and collaborating with suppliers as partners needs to be the norm.